I have a dream…

Continuing on in the tradition of Martin Luther King Jr., youth at peace camp dedicated themselves to the nonviolent pursuit of peace and justice. Pictured: Gerard, one of the 48 youth peace camp participants, delivers his dream, a poem about sustainable peace, as part of our World AIDS Day youth event, held shortly after the camp.

“Now is the time to lift our nation from the quicksands of racial injustice to the solid rock of brotherhood,” noted Martin Luther King Jr. some 48 years ago in his now infamous speech, I Have a Dream. His words set a revolution in motion, from America to around the world, a nonviolent war against racism, and any other injustice that destroys dignity, that divides and exploits. 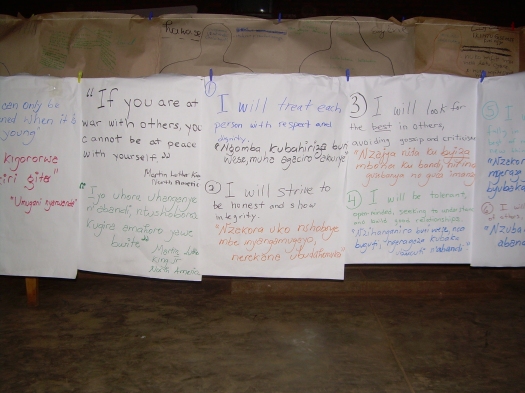 The dream – and the fight – for peace, love and unity continues. Youth at peace camp reflected on the sayings and legacy of King and other heroes like Ghandi and Mandela, all of whom advocated the  use of nonviolence to restore broken communities.

Some youth even created their own response. Watch Gerard’s performance and others.

At camp, youth shared some of the conflicts and injustice that  they face today:

“I love a boy but we are from two different ethnic groups. I’m wondering how I can proceed to make my parents understand that I love him.”

“I live with my sister and brother-in-law. My sister died and now he wants to always sleep with me. I cannot leave him before I finish my studies because he is the one who pays my school fees. So how can I live with him without conflict and without sleeping with him?”

Youth discussed solutions and then worked on dramas to be able to help open up more dialogue on these and other pressing issues.  They also learned about the power of film and worked on scripts, one of which is currently in the works, to be made into a short film by Almond Tree Films Rwanda. See more photos and actvities from peace camp.

On our last night at camp, we created and signed a group commitment to peace:

We who participated in the peace camp,

We swear in God’s and men’s eyes

That we will be catalysts for peace in both good and bad times,

striving for peace and restorative justice

fighting any type of violence

guided by the word of God,

may God help us to achieve this noble commitment.

Shortly before King’s assassination, he delivered yet another impassioned speech, *A Time to Break Silence, advocating for “a genuine revolution of values…this call for worldwide fellowship that lifts neighbourly concern beyond one’s tribe, race, class and nation…a call for an all-embracing and unconditional love for all men.”

That takes the highest, self-sacrificing kind of love, agape love, the love of God, at work in people’s hearts, noted King. He died for his beliefs.

But his dream continues…”a dream of a peace where all of our gifts and resources are held not for ourselves alone but as instruments of service for the rest of humanity; the dream of a country where every man will respect the dignity and worth of all human personality, and men will dare to live together as brothers – that is the dream.”

*For these quotes and more on the legacy of Martin Luther King Jr. see, I Have a Dream: Writings and Speeches that Changed the World.

One Reply to “a peace of a dream”